Ahead of the release of my novel His Majesty's ShipI was pleased to give an interview to Historic Naval Fiction and on the release of The Guinea Boat I was interviewed by World of the Written Word. Both are reproduced below.

When did you begin writing?

Not until my early twenties. It had always been an interest, but I was hampered with dyslexia which affected my handwriting and spelling. It wasn't until this was identified that things started to improve. I was one of the first to attend Clayhill Centre, a specialist school that carried out a lot of pioneering work treating the condition.

Do you regard Dyslexia as a major disadvantage?

No; the very reverse. Most people know how to spell; dyslexics have to remember and the discipline improves the memory. I find facts, dates and details very easy to recall. Moreover I think dyslexia encourages a lateral slant, certainly as far as solving problems is concerned, but also when writing creatively. A lot of my fellow comedy writers were dyslexic.

Rather bumpy. I began long before word processors were freely available, and most of my work was poorly presented. I bought one of the new Amstrad PCWs and, for the first time, had control over presentation. I was published almost immediately afterwards.

My first work was for boys' adventure titles (comics!), writing battle stories and later M.A.S.K., a science fiction based concept that was heavily franchised. Since then I have worked for various periodicals, as well as a three year spell at BBC radio. I've also written for the stage and television.

Where did your interest in the sea originate?

I am English; it's in our blood!

What is the appeal of the Georgian period?

It was a fascinating time. Conditions changed greatly over a relatively short period and, on more than one occasion, Britain really was on its knees. A major factor in our survival was the personalities of the period. Obviously I'm thinking of naval commanders (and Nelson was only one of many really great leaders), but also politicians, engineers, scientists; figures from almost every field made a dramatic impact on our history.

How do you undertake your research?

The internet is a useful tool, although I tend to prefer good old fashioned books. I have favourites amongst historians, such as Michael Lewis, Christopher Lloyd, Colin White and Brian Lavery, but I also search out contemporary accounts whenever possible. News sheets from the period give an excellent insight, and there is something about touching the paper and reading the words printed at the time that almost takes you back there.

Your descriptions of life on board a Georgian warship are very vivid, how do you achieve this?

I believe that projection is the basis for all creative writing; if you have not actually been there you have to project: there is no other option. When I had just started writing historical naval fiction I attended an event hosted by the Historical Maritime Society. This is a group of enthusiasts who re-enact the period. Far more than dressing up in uniforms, they take great pains to truly understand and convey what it was like to serve in the navy at that time. I found myself talking to a purser who took me to meet their lieutenant in command; on the way we passed two ordinary seamen, who knuckled their foreheads. I was then introduced to the lieutenant, who wished me joy. After many months of imagining the uniforms and men, to actually see and meet them was oddly moving.

In the two books published to date you have no major hero, such as Hornblower; was that intentional?

Oh yes. I am a great fan of Forester, and many other nautical fiction writers, but they do tend to tread the same path. When you pick up a book about "Mr Midshipman Whatever" you have a strong inkling that he will survive to the end. More than that, there is more than an even chance he will be back as a lieutenant, a commander and on until the writer runs out of energy, or ranks. In the 'Fighting Sail' series I am focusing on a group of officers and men; some will prosper, while others fail, and there are some who will inevitably die. Each book centres on a few of these men, some may re-appear in other stories; a few will be featured prominently, while others will fade away. I feel this is an honest approach; one that truly represents the navy at that time, and I am also excited by the greater range of dramatic possibilities that this format allows

How important is history to your stories?

Very; I try to include as many actual events, and real people as I possibly can.

Do you plan your storylines before starting to write?

Yes, although sometimes characters and events can take over and surprise you.

You have recently moved to a new publisher; do you envisage any changes to your work?

Only for the better; Pen were friendly to deal with but they are a small press (and extremely slow at paying royalties!). Fireship are far more dynamic and their senior editor, Tom Grundner, is an expert in matters historical and nautical. We speak the same language, and I find his comments stimulating and encouraging. He also has a good eye for detail. You might notice that the original name for the 64, as quoted in Jackass, was HMS Proteus. I'd chosen that as there wasn't a ship by that name in the Georgian Navy. It was Tom who noticed that Proteus had already been used by another nautical fiction writer, so it was changed to Vigilant.

What are your future plans?

To write more books, continuing with the characters I have established, and following the history of the Revolutionary and Napoleonic Wars. Fireship are releasing His Majesty's Ship in May 2009, and following up with a revised edition of The Jackass Frigate towards the end of 2009. I hope to have the next, which will concentrate on the mutinies, and Admiral Duncan's North Sea Fleet, ready for the spring of 2010.

Do you ever get bored with writing?

World of the Written Word

Thank you, Alaric Bond, for agreeing to be interviewed by World of the Written Word

Congratulations on the launch of your eighth Age of Nelson novel, The Guinea Boat, an edge-of-the-seat thriller in which the hero is challenged not just by pirates, but by smugglers, too.

JD: Like your very well-reviewed Turn a Blind Eye, which was also about the free-traders who sabotaged the English economy during the Napoleonic Wars, it is a departure from your usual style. You were already the author of the very successful Fighting Sail series, so what inspired you to make this change of course?

AB: The Fighting Sail series is very important to me: I enjoy using the same characters, and being able to continue a story that reflects my interest in the French Wars from the Royal Naval angle. But the long periods of conflict affected other forces and organisations as well. Some, such as the Revenue Service, John Company and even Trinity House, are well known, while others, like the Sea Fencibles – effectively a “Dad's Navy” of the period – have been rather neglected. I feel there are plenty of tales to tell from a different perspective and the change of viewpoint opens up a whole new aspect to the times.

JD: Another thought is that through the six books of the Fighting Sail series, you must have become attached to the core characters. How difficult was it to create a new hero, and his antagonists and allies? Did it turn out to be a rewarding experience?

AB: Oh, it was very rewarding – and very freeing. There is nothing I like better than meeting new characters: the only problem comes when you have to abandon them at the end of a story. With regard to my Fighting Sail series, this has no central hero, but relies instead on a diverse collection of individuals of differing ranks and disciplines that appear from book to book. That was a conscious decision for me, and allows the true danger of any situation to be shown: basically, I can kill people... When you read book five of a thirteen volume series about a central hero you know there is a fair chance they will get to the end in one piece. With my Fighting Sail books, everyone is vulnerable.

JD: Did the change of direction involve a change in tempo? Or do you plot the book the same way, with events evolving towards an exciting climax? Is it unusual for you to introduce a romantic element, for instance?

AB: I tend to plot all my books in much the same way, although the tempo of Guinea Boat is more reflective than that found in a Fighting Sail story. The change has allowed a good deal more insight into each character. And yes, there is a romantic element, although that is not unusual in my work. With regard to climax, I am especially pleased with the ending to Guinea Boat. It is not a dramatic fleet action, yet I think there will be enough to keep most readers interested.

JD: Did it mean that you had to do a lot of new research? Or do you always start off a new line of background study, with every book you write? At the same time, could you tell my readers something about how you tackle the job of creating an authentic, yet evocative setting? For instance, do you take pains to learn the spoken idiom of the locality in that era? Costume? Social manners? After all, you are writing in the era of Jane Austen as well as Admiral Nelson!

AB: Research is king; it begins long before any story has been mapped out, and never really ends. Not all is included in the actual text however – nothing slows the pace of an adventure story better than a succession of gratuitous facts, (and sometimes it is the more obscure points that truly cement the atmosphere and setting for a tale). I live relatively close to Hastings, where much of the action in Guinea Boat is set, and spent a good deal of time there walking along the ancient Rock-a-Nore, speaking to fishermen on the Stade, where their predecessors have worked for over a thousand years, and eating far too many fish and chip lunches. I learned much of the local slang and jargon, which remains in use and has been incorporated into the book. A selected glossary listing this, as well as more common nautical words and phrases, is included for those not familiar with the area.

JD: My readers always appreciate learning something about an experienced writer's routine. Do you write every day? All day, or just part of the day? And what is your favourite place for creating an Alaric Bond novel?

AB: I start at nine and end at five, pretty much six days a week although obviously the actual business of refining plots and polishing characters tends to be twenty-four, seven. We live in a house that was built in 1392, which is not unusual in my part of England. It has crooked floors and walls; the beams are low, much of the old glass gives some strange and wonderfully distorted images, and there is an atmosphere that is almost tangible (I blame the cat). To my mind it is the ideal place to create historical fiction.

Again, thank you very much for sharing so much with us. Much appreciated, I assure you! 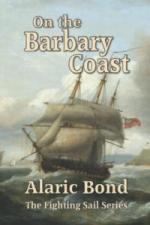 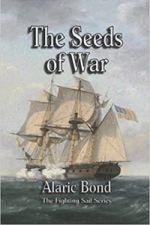